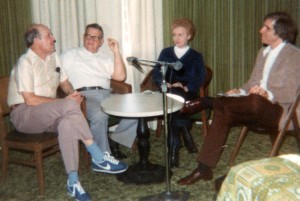 Interview with Eldon Shamblin, Tiny Moore, & Dean McKinney Moore.
March 10, 1981 at Harrah’s Hotel Casino, Reno Nevada.
The interview was conducted by Tom Diamant for his radio show Panhandle County. At that time Tiny Moore and Eldon Shamblin were in Merle Haggard’s band which was playing that weekend at Harrah’s. The complete interview is 1 hour and 13 minutes long. It is unedited except for trimming it at the end. It was originally recorded on cassette and there is a brief pause and slight change in tone when the cassette is turned over. Jeff Alexson is also in the room and can be heard in the background occasionally.
The interview has been broken into 4 segments for easier listening.
Part 1 Part 2 Part 3 Part4
Here are two videos of the 1946 Bob Wills Tiffany Band.
Thanks to Bob Richards “radiobob805” for posting them on YouTube.
Check out his other posted Bob Wills and western swing videos.
Bob Wills – Fiddle / Vocals, Tommy Duncan – Vocals, Dean McKinney – Vocals. Evelyn McKinney – Vocals, Joe Holley – Fiddle, Louis Tierney – Fiddle , Millard Kelso – Piano, Alex Brashear – Trumpet, Noel Boggs – Steel Guitar, Lester (Junior) Barnard – Electric Guitar, Johnny Cuviello – Drums, (see comment below) Luke Wills – Bass
Here’s Dean McKinney Moore talking about Wills Point in Sacramento and about being in the band.
Some nice photos, but poor quality youtube video.

This next one is not Bob Wills, but Merle Haggard with the Texas Playboys. Many of the Playboys featured here played on the Tiffany Transcriptions (Tiny Moore, Herb Remington, Joe Holley, Alex Brashear). This is some great western swing, stop what you’re doing and watch it. Crappy video quality but pretty good sound. Required watching! Really.
As of July 12, 2017 this video has had 159,154 views!