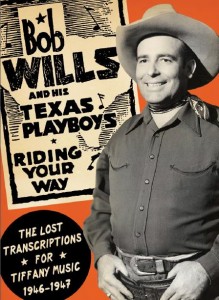 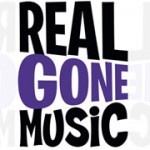 Mike Johnson was a determined man. He had become a fan of Bob Wills and the Texas Playboys, and had owned all the Tiffany Transcriptions re-issues starting with the ones on Kaleidoscope. At his job working in the Rhino Records / Warner Music Group’s tape vault he had discovered the 49 10 inch reels of recording tape containing the Bob Wills Tiffany Transcriptions. These were the original dubs that Kaleidoscope Records had made of the 16 inch masters and transcription discs back in the 1980’s. Rhino had acquired these when they purchased Kaleidoscope Records back in 1992. To say he was thrill would be an understatement. He went to work transferring the tapes to digital and putting together a 4 CD set that he had hopes Rhino Records would release.

Unfortunately, the record industry had changed over the years and sales of CDs had dropped tremendously. After a long deliberation Rhino decided not to release the material. But Mr. Johnson was a determined man. If Rhino wouldn’t release them, perhaps they would license the project to another label (Kaleidoscope Records never owned the Tiffany Transcriptions, they only licensed them. When Rhino purchased Kaleidoscope they had only purchased the license to release the recordings which was soon to end, however Rhino renewed the contract with the current Tiffany Transcriptions rights holder).

Mike started approaching other labels seeing if they were interested in releasing his project and after one deal fell through he set up an agreement with Real Gone Music. Real Gone Music is run by Gordon Anderson, the very person who re-issued a box set of the Tiffany Transcriptions (recreating the Kaleidoscope Records releases) when he was running Collector’s Choice Music in 2008. He knew the value of the music and he was a fan. However, the 4 CD set that Mike had originally envisioned had to be cut down to two CDs due to the costs of licensing from Rhino and the general slow sales of CDs. Twenty-four years after the last new Tiffany Transcriptions re-issue had been released the world would hear 54 previously un-released recordings! Mr. Johnson’s determination paid off.

Producer Mike Johnson had a vision to create a real tribute to the Tiffany Transcriptions, as did his co-producers Patrick Milligan, and Gordon Anderson and they were determined to do it right. They had two Tiffany Transcription releases in 2014, an LP and a two CD set. 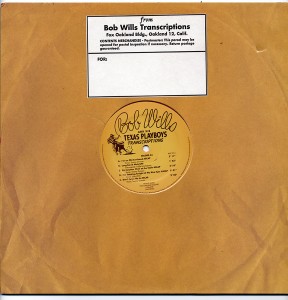 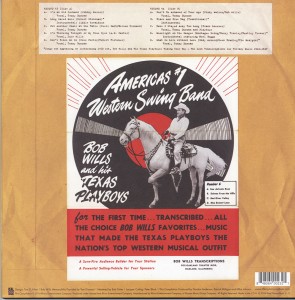 The first was a 12 inch vinyl LP with 10 tracks on it released on April 19, 2014. This was a special “Record Store Day” limited edition. Record Store Day is a yearly industry event organized by independent record stores to publicize the unique value of their businesses. Record labels release special limited edition items (usually vinyl these days) to be available only on that day. It draws lots of people, some lining up early in the morning so they can get items before they are sold out. 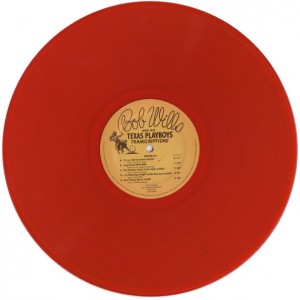 The LP contains:
Side One (Record 53)
A. I’m An Old Cowhand
B. Long Eared Mule
C. Put Another Chair At The Table
D. I’m Thinking Tonight Of My Blue Eyes
E. Don’t Fence Me In

Side Two (Record 54)
A. Don’t Be Ashamed Of Your Age
B. Black And Blue Rag
C. Have I Stayed Away Too Long
D. Moonlight On The Ganges,
E. What Is Life Without Love

Four of these tracks (Long Eared Mule, Black And Blue Rag, Moonlight On The Ganges, & What Is Life Without Love) were not on the later Real Gone CD release. This caused some disparaging remarks from buyers who didn’t want to have to pay for both the LP and the CD set. These were defended by those who knew that the record business was in difficult times and that a marketing plan such as this was a small price to pay for the release of more Tiffanys. Plus, it was a collector’s item.

Although Real Gone Music sold out of their supply of LPs, they are still available in some storse and on Ebay as of this writing (April 6th, 2015)

The two CD set was packaged in a DVD sized tri-fold box, with a 24 page full color booklet. Tom D. Kline’s design made liberal use of original graphics and documents from the Tiffany Transcriptions files and photos from the era (graphics and photos supplied by a number of sources, including this website). There is one previously un-issued photo supplied by author Cary Ginell of the entire Bob Wills & his Texas Playboys Tiffany era band. Unfortunately it is under the clear CD tray holders, so it is some what obscured (see below) but excellent none the less.

In his introduction Mr. Johnson discusses how he became a Bob Wills fan and when working one day in the Rhino/WMG tape library he discovered the 49 “lost” 10 inch reels of tapes, the complete Tiffany Transcriptions. Of course they weren’t really lost, many of us knew exactly where they were, but it gave the set a good mystique and Mr. Johnson deserves credit, for had he not found those tapes, this release would not have happened.

Real Gone Music hired Cary Ginell to write the notes. Mr. Ginell is an expert on western swing, jazz and other music (see more of Mr. Ginell’s work here). Mr. Ginell’s notes give excellent background on Bob Wills and a good overview of the Tiffany Music Company, the sessions and the songs. Of particular interest are the short biographies he gives on the musicians. This is the first Tiffany Transcription release that gives good background information on the individual musicians (although he leaves out Roy Honeycutt who played steel guitar of three Tiffany sessions).

Mr. Ginell interviewed Herb Remington shortly before the release of this set and many of his comments and observations about recording the Tiffany Transcriptions and working with Bob Wills are printed in the booklet.

There is also an alphabetical listing of all the known songs recorded for the Tiffany Transcriptions and some of the release information. The CD song listings list the vocalists and the songwriters. The notes list the sessions, dates and other personnel.

There was some EQing done on this release and there seems to be a slight mid-range boost to the original dubs that give this set a slightly harsh sound particularly in the vocals of Tommy Duncan when compared to the original dubs of the masters. This is more noticeable on some tracks than others. 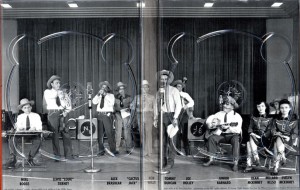 Rare photo of the Texas Playboys, used under the CD holders.

The songs are presented in chronological order drawing from every session, of the Tiffany Transcriptions, with the exception of the May 30/31, 1947 sessions. Most of the songs had not been issued before (except for some on the original 16 inch transcription discs). The exceptions are “El Rancho Grande” which appeared on the Lariat Records LP release and “Don’t Fence Me In”, “On The Alamo”, “Silver Dew On The Blue Grass Tonight”, and “Traveling Blues”, which were released on the BACM CD (a CD of such poor quality it should not even be counted).

This is a good over view of the material that was recorded on the Transcriptions. Ballads, western songs, pop songs, and fiddle tunes are all well represented with the energy and looseness the Tiffany Transcriptions are known for. However, there are no jazz instrumentals. Almost all of those were released on the Kaleidoscope re-issues (it was their main focus), so there weren’t many left un-issued. But, there’s still lots of high energy playing and singing by the whole band and a good deal of Bob Wills’ fiddle. One particular highlight is steel guitarist Noel Boggs playing a fantastic slow instrumental; “On Alamo”. 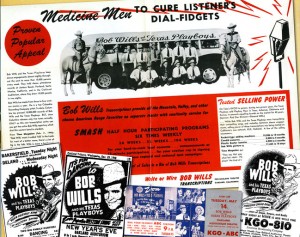 Disc 1
1. Put Another Chair At The Table
2. Make Room In Your Heart For A Friend
3. I Can’t Begin To Tell You
4. No Letter Today
5. The Covered Wagon Rolled Right Along
6. Brushy Fork (Instrumental)
7. Yellow Rose Of Texas
8. Columbus Stockade Blues (Version 1)
9. Paradise Isle (Instrumental)
10. I Wonder If You Feel The Way I Do
11. A Year Ago Tonight
12. Brown Skin Gal (Instrumental)
13. Ride On! (My Prairie Pinto)
14. Travelin’ Blues
15. Dear Old Southern Home 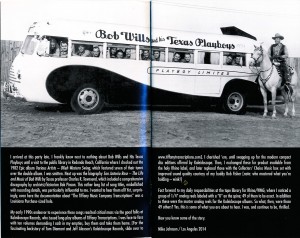 Disc 2
1. Sally Johnson (Instrumental)
2. Silver Dew On The Blue Grass Tonight
3. No Wonder (That I Love You)
4. I Knew The Moment I Lost You
5. I’m Thinking Tonight Of My Blue Eyes
6. Love Letters In The Sand
7. River Stay ’way From My Door 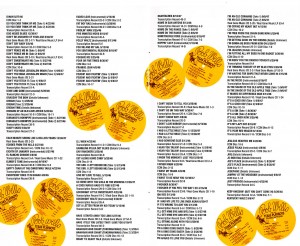