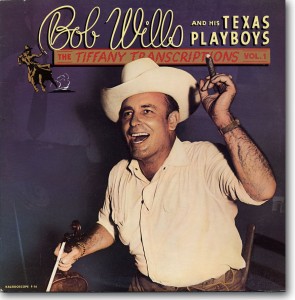 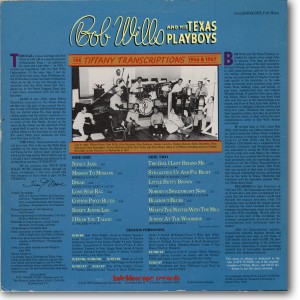 Kaleidoscope Records was co-owned by Tom Diamant and Jeff Alexson and had been successful releasing recordings by contemporary musicians such as the David Grisman Quintet and Kate Wolf. Diamant and Alexson were aware of the Tiffany Transcription releases on both Tishomingo and Lariat and had, in fact, been the distributor for both releases in Northern California. Both were huge Bob Wills fans and Diamant frequently featured the music of Wills on his radio show Panhandle Country (still on the air as of this writing (3/1/2012) on KPFA-FM Berkeley, CA).

Kaleidoscope Records had its offices in El Cerrito, CA, just north of Oakland. They knew of Cliff Sundin and in 1980 approached him about releasing the Tiffany Transcriptions on Kaleidoscope Records. Sundin was hesitant, the Tiffany Transcriptions had been nothing but trouble for him. It was Jeff Alexson’s persistent and persuasive conversations with Sundin that convinced him to allow the negotiations to continue. 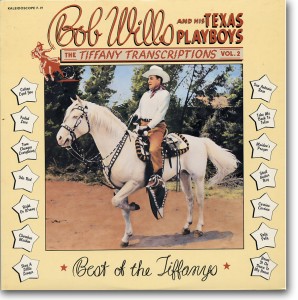 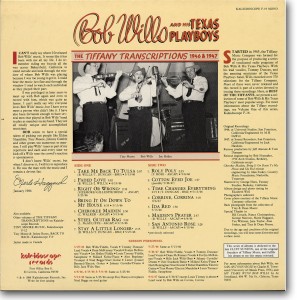 However, Sundin took ill and was no longer able to discuss the matter. At this point his granddaughter, Nancy Telles, took over the negotiations. Telles was very keen on having Kaleidoscope Records release the Tiffanys and negotiations moved forward.  Sundin then recovered from his illness and he started discussing the whole arrangement all over again with Alexson. However, he was still very skeptical about getting involved with another potential disaster regarding the Tiffanys. Before an agreement was settled, Sundin again took sick and died on July 8, 1981. 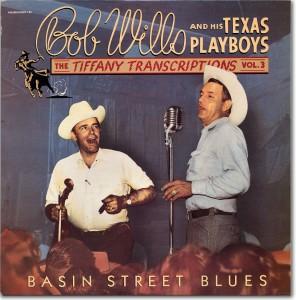 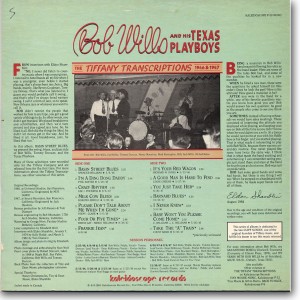 One legal fact should be noted. Kaleidoscope did not purchase the rights to the Tiffany Transcriptions. It only licensed the right to release as many albums as Diamant and Alexson wanted for six years. Each album then had a license term of 10 years from its release date. The rights to all material not issued during those 6 years, reverted back to Telles.(See Contract2)

Alexson and Diamant knew they had licensed something special but they were not prepared for the treasure they were about to discover. Sundin was a packrat. His house on School Street in Oakland California had a large dirt floor crawl space/basement  underneath it where he kept everything from his life, including most of the items from the Tiffany Music Company. As Alexson, Diamant, and Telles crawled into the space they found box after box of pressed Transcription Discs (including sets of the legendary records 49 through 52 which were never distributed and the B.F. Goodrich disc), thousands of unused printed labels for the transcriptions, hundreds of the famous Tiffany Transcriptions advertising flyers, hundreds of different continuities (scripts for the transcription show), stationary, receipts, original art work, advertising graphics, canceled checks, business records and more. As the two owners of Kaleidoscope Records discovered treasure after treasure of western swing history, Nancy Telles was discovering personal family history such as a Christmas card she had give her granddad 20 years earlier. He apparently threw away nothing. 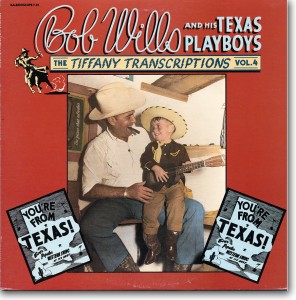 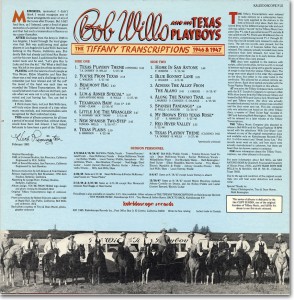 Upstairs in the house, kept safe in a closet, were the acetate masters to the sessions, more business records, several copies of the Tiffany 78, photos and more. There were many reel to reel tapes and cassettes of the songs Sundin composed, phone conversations he had recorded, including some with Bob Wills, and portions of radio shows such as the parts of the Zoom Cereal shows heard on this website. There were personal items such as albums filled with lyrics and sheet music of the songs that Sundin composed, and photo albums from his life, including several photos of burlesque performers with dedications to Sundin written on them (Sundin had worked as a projectionist at a burlesque theater).

This was a real find and gave the first true background to the Tiffany Transcriptions.

After consulting many sound technicians and experts in the copying of acetate discs, Diamant and Alexson started to copy all the recordings at 15IPS (inches per second) to tape using the facilities of 1750 Arch Street recording studios with sound engineer Bob Shumaker. During the transfers, no electronic effects were used. The original recording engineers had done a great job recording the sessions so only slight equalization was used to bring out the best tonal qualities of the music when the final LP masters were assembled. . 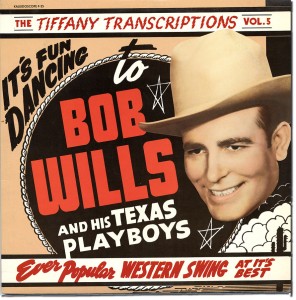 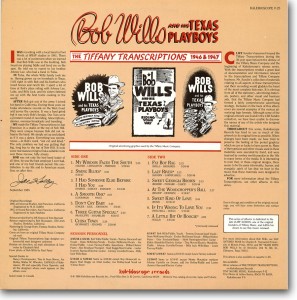 Diamant and Alexson started to consider how they would release the songs. A complete, chronologically ordered set of releases was never considered. There were over 360 complete songs and more than a few were only of interest to the hardcore Wills fan. It would not have been an easy or exciting set to listen to. They decided to release the best, most entertaining albums possible. Much time and thought went into choosing the selections and sequencing the albums. They wanted someone who had never heard this music to be thrilled by it.

Fortunately many of the musicians who had been on the sessions were still alive. Tiny and Dean (McKinney) Moore lived not far away in Sacramento (as did Dean’s sister Evelyn). Johnny Cuviello lived in San Jose. Kaleidoscope decided to interview as many musicians as possible to get a real feeling of what it was to live through those musical times. 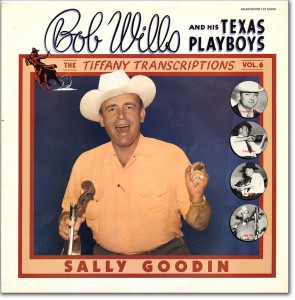 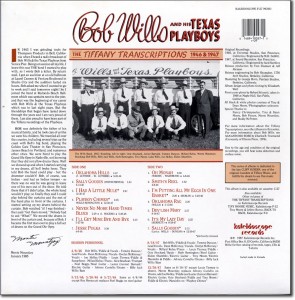 With the original art work and advertising available, Kaleidoscope Records was ready to start designing the look of the series. A fortunate event took place which would greatly influence the album covers in the series. Larry Kelp was a friend of Alexson and Diamant and was a music critic for the Oakland Tribune. He knew about the impending releases and looked in the Oakland Tribune archive to see if there were any photos of Wills from that time period and came upon a wonderful discovery. Oakland Tribune staff photographer Robert Stinnet had been sent out sometime in 1948 to Maple Hall, a popular dance hall in San Pablo, California, to photograph the Wills band for a story. The story never ran, but the photos were still there and Stinnet was still alive and had the original negatives. This gave Kaleidoscope a wealth of live performance photos of Bob Wills and his Texas Playboys right from the era of the Tiffany Recordings.

Kaleidoscope also put the word out to Wills collectors and received many photos, thoughts and ideas from many a Wills fan.

Elizabeth Weil was the graphic artist that Kaleidoscope Records used for the Tiffany Transcription albums as well as other Kaleidoscope Records releases. Using the original Tiffany Transcriptions logo, graphics and photos from the Tiffany collection, other collectors and Stinnett’s photos, which she hand tinted, she created a classic series of album covers. 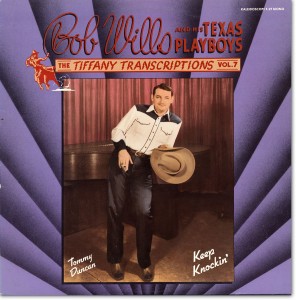 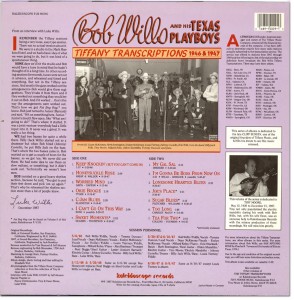 Kaleidoscope Records released volume one in 1982. The first song on side one was “Nancy Jane”, chosen because it was one of the first songs Bob Wills had ever recorded with Milton Brown back in Dallas Texas in 1932, and the 1946 Tiffany Transcription version had never been issued before. Half of the material on Volume One had never been issued including the second track, Mission to Moscow. No one had ever heard anything like it.

Below is a list of the Kaleidoscope Records Tiffany Transcriptions releases with original catalog number and copyright date. Click on a selection for detailed information and comments about each release. 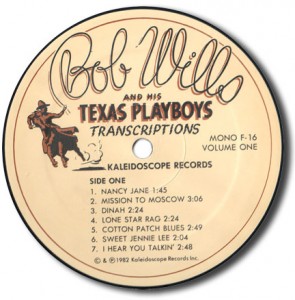 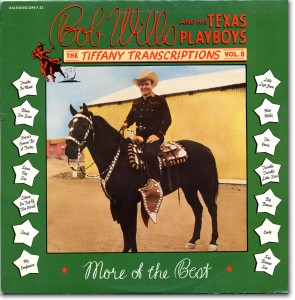 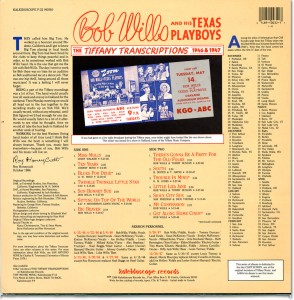 As Kaleidoscope went through the material they felt that ten albums would represent the cream of the crop and they would stop that series after Volume 10. This coincided with the end of the LP era and the next releases planned would all be on CD and cassette only.

The McKinney Sisters release, planned originally to be only on cassette, came out of the request of Dean and Evelyn McKinney to have a release that they could sell at their gigs. They had revitalized their career and were performing again. At first Alexson and Diamant were not planning on making it a regular Kaleidoscope release, but after choosing the selections they felt if would fit well with their planned “For Collectors Only” series and released it on both CD and cassette. This series was the follow up plan to the original 10 albums. It was to dig deeper into the material and supposedly only be appreciated by collectors. Since a CD could be up to 72 minutes, at that time, each release would have at least an hour’s worth of music. The McKinney Sisters was numbered 6002. 6001 was to be an album of Bob Wills fiddle tunes from the Tiffany Transcriptions. 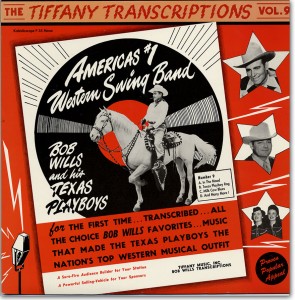 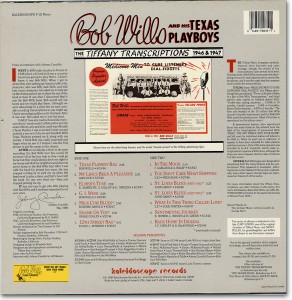 The McKinney Sisters was released and Volume 10 “Fiddlin’ Man” was planned for release. Test pressing were made. It was going to be a picture album with a hand tinted photo of Bob Wills on one side of the disc and Tommy Duncan on the other. The CD and Cassette would have the photos on them as well. 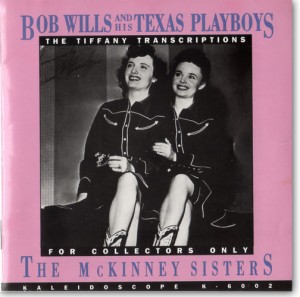 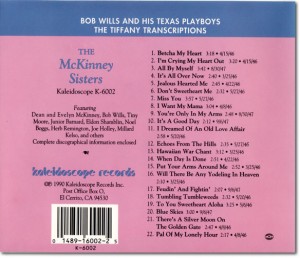 It must be noted that Rhino Records did not purchase the Tiffany Transcriptions with the purchase of Kaleidoscope, only the license to release them, which by 1992 was expiring on Volume 1 and the right to issue new material, within six years had past. Rhino re-issued all the albums as originally released on Kaleidoscope with new catalog numbers. For some reason Rhino never issued Volume 10 and it is now in the Warner Brothers vaults (Warner now owns Rhino.) 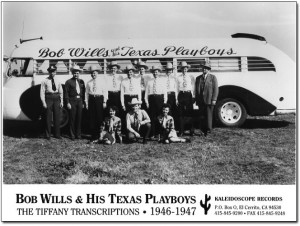 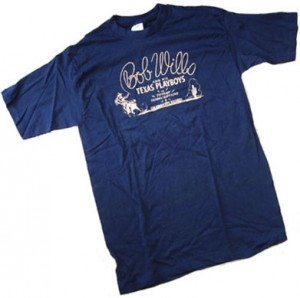 Kaleidoscope Records used the original graphics and photos available to them for various promotional products, including a special envelope, an 8×10 promotional photo and the Tiffany Transcriptions T-shirt seen here. 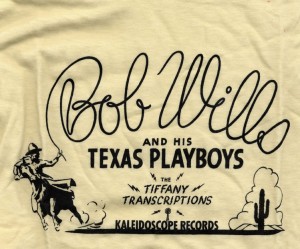 women’s style seems to have been short lived and is not listed in later catalogs.

There were a few very limited runs of sweatshirts, hooded sweatshirts, long sleeve t-shirts and children’s sized t-shirts made mostly for Kaleidoscope Records employees and friends.

There was an advertising flyer

that was inserted in the LPs, featuring a photo of Kaleidoscope Records co-owner Jeff Alexson wearing a black t-shirt (and holding one of his beloved chickens) and graphic artist Elizabeth Weil (who designed the T-shirts and all the covers for the Kaleidoscope Tiffany Re-issues) wearing a women’s t-shirt. 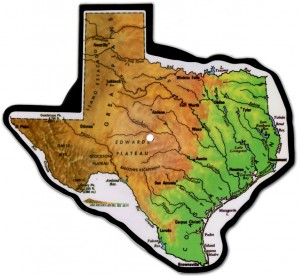 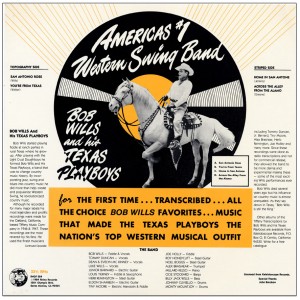 In 1984, Rhino Records licensed four songs from Kaleidoscope Records and released a Texas Shaped vinyl, 331/3 RPM record. The record was packaged in a clear vinyl sleeve with thin cardboard backing with notes.

There were two versions of the disc. One was on clear vinyl with a Texas shaped map on one side and a striped patter in the reverse shape of Texas on the back. The other was black vinyl with the same map of Texas on the front, but the back was black with a small striped label sized circle in the center. 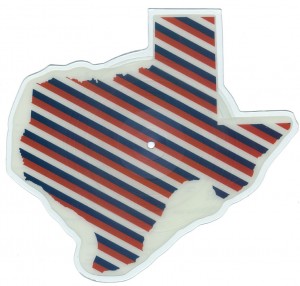 On the map side was:

On the reverse side was:

Across the Alley From the Alamo 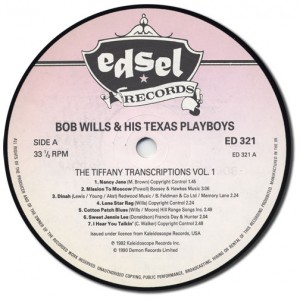