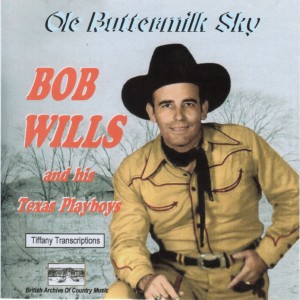 In 2002 the British Archive of Country Music released this CD. BACM is an independent  label out of England that specializes in reissuing old American Country Music. They have released some interesting CDs. However, Ole Buttermilk Sky is an unfortunate mess of a CD, with a couple of intriguing tracks on it. There are 25 tracks, 23 of which are definitely from the Tiffany Transcriptions. Of the remaining two, one is from the “Presto Transcriptions”, which has been reissued a couple of times, and one is from an unknown source (but it may be a Tiffany.) Three of the Tiffany tracks have been issued before on Kaleidoscope Records. So, you end up with 20 new Tiffany tracks that had not been reissued before, plus that unknown one. Unfortunately most of the unissued tracks on this CD have been dubbed at the wrong speed and are too fast. BACM did not license this material from the current owner of the Tiffany Music Company since under European copyright law the Tiffany Transcriptions are in the public domain (not so in the United States). The notes, by Brian Golbey, are pretty skimpy and uninformative. He admits that some of these tracks may have been released before suggesting that to find out that information would be difficult.  Not really. Anyone familiar with the recordings of Bob Wills could easily have checked the ten releases of Tiffany material to see what has been released. 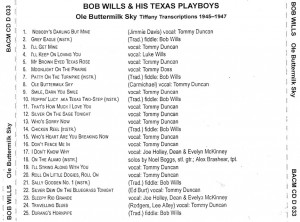 The recording dates for the individual tracks are not listed but on the back it says 1945-1947.  Since the correct recording dates of 1946-1947 have been known now for over 25 years, this is just sloppy work. This CD is a poor representation of the music of Bob Wills, but allows one to hear  16 (in 2014 Real Gone Music issued 4 of these tracks) more Tiffany tracks plus one unknown (and I guess hearing them at the wrong speed is better than not hearing them at all). If you are a completist, you’ll probably have to get this (I did!), but if not, stay away from this one.

Here’s a track by track rundown.

2. Grey Eagle – This is not a Tiffany recording, it’s from the so called “Presto Transcriptions”. It’s an instrumental fiddle tune, and it’s been dubbed too fast. Grey Eagle is in the key of A. One has to assume that since Bob’s band had a piano in it, that his fiddle was in tune with the studio piano, which was probably kept tuned pretty close to concert pitch. On this dub however, the fiddle is somewhere between B flat and B. It’s been copied too fast.

Recorded in 1949, these radio transcriptions were made for the Crosley Appliance Company but little is currently know about them. The Crosley Transcriptions, as they should really be called,  (Presto was just the name of the manufacturer that made blank, acetate transcription discs and the name Crosley apparently was not on the original discs) are filled with tremendous music, but have not been given the praise they deserve. This is due to several reasons. 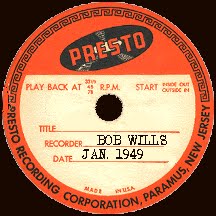 First and foremost, Tommy Duncan had left the band in 1948 and no one was going to be able to replace him, so the vocals, ranging from not too good, to not too bad (even Eldon Shamblin sings one), were just not Tommy.  The sound on the LP and CD reissues is not very good, the mix is fine, but there is no high end, no life to them, there is much distortion, the sound quality drifts in and out, and worse, most of the available dubs reissued on LP and CD were transfered too fast.   The last reason that the Crosley Transcriptions never reached the fame they deserve is that they have never been re-issued on LP or CD with an ear towards making a great set of sequenced music or packaged attractively with good notes. All though over 90 tracks from these transcriptions have been release on LP and CD over the years, it’s been done is a very haphazard way. One reason the Tiffany Transcriptions re-issues on Kaleidoscope Records were so praised is that a great deal of time was devoted to choosing the songs and the sequence they would go in plus the packaging and notes were good.

However, if you want to hear Tiny Moore, Herb Remington, Eldon Shamblin, Alex Brashear, Millard Kelso, Jesse Ashlock (fiddle), and Mancel Tierney (piano), take some of the wildest, hottest solos of their careers, backed by a solid, jumpin’,  rhythm section, the Crosleys are the place. They just cook! Some of Eldon Shamblin’s best single string solos can be found on the Crosleys. All the band instrumentals are amazing. Just either slow them down on your computer, turntable, or CD player, or just get into them being too fast (there are some at the right speed). Many of the vocal selections are of interest only to fanatics, particularly when compared to Tommy Duncan  and need to be listened to only once, unless there’s a hot solo on it. Someone needs to make new, good dubs from the original discs.  – A belated update: In 2015 the Oklahoma Historical Society released an excellent LP of perfectly remastered Crosley Transcriptions. Great sound and wonderful package. When I get around to it, I’ll write a complete post on it. Click here to learn more.

This fiddle tune, Grey Eagle, does not have any of those hot solos on it, but it’s a nice old time Texas fiddle tune played by Bob the way his dad would have played it.

4. I’ll Keep On Loving You – I do not know where this is from. It could be a lost Tiffany. It’s the right band. Alex Brashear on trumpet is called by name, it sure sounds like Kelso on the piano, Luke Wills is singing, (there’s a train wreck between the vocal and fiddle near the end) and you can hear Jr. Barnard throw in one of his standard ending licks on guitar. This song is not listed in any of the original Tiffany Music Company recording data. However, that data was very incomplete and the best information came from playing the original acetate masters. The masters from two of the sessions were lost a long time ago and what was on them was never documented. We know that there are dubs of some unissued Tiffanys in circulation. The legendary “bus driver tapes” which have all the Tiffanys issued on transcription discs, also have at least a couple of songs that were not issued and came from the acetate masters or copies of them. Are there unissued songs from the lost masters circulating out there? Is this one of them?

This is very intriguing. This song from the original acetate masters has never been issued. When they wanted to make sure a track was never issued (who made those decisions? Bob, Cactus Jack, Cliff?), they would take a grease pencil and mark a circle several times around the track on the master so it would be unusable. They would sometime even carve an “X” in several places in the acetate making it unplayable. The version that came from Cliff Sundin’s acetate master was greased out and you can clearly hear the needle going over the grease marks. It’s a very broadband sound that would be very difficult to digitally remove (update: Real Gone Music did a great job cleaning this track up and issuing it in 2014, but even with their expert cleaning you can hear very subtle remnants of the noise). The intriguing thing is, the version on this CD does not have the grease pencil noise on it but it is definitely the same recording (although dubbed too fast). So the track on this CD comes from a copy of the master before it was marked out. As mentioned above, there seem to be copies of some of the unissued tracks in circulation. Cliff Sundin was very protective of his masters, so we will have to assume that copies were made of the masters for either Cactus Jack or Bob Wills to listen to or for some other reason. Who knows what might be out there?