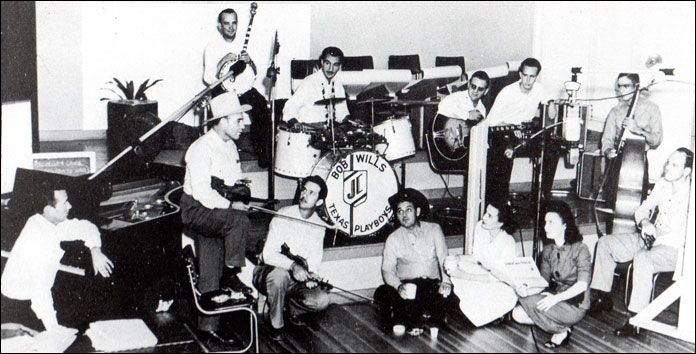 Slim Andrews was a comedian who traveled with the Bob Wills band. The songs he recorded here are of a comic nature. Because of this photo he has been sometimes credited as playing fiddle, but members of the Wills band say he just held it as a prop.


TRANS means which Tiffany Transcription disc (16 inch discs distributed to radio stations) it was released on and the letter is the track number. Issued is where is was issued since the demise of the Tiffany Transcription Co. KAL means Kaleidoscope with the following prefixes “F” means LP, “C” means cassette and “K” means CD. Not all issues on other labels are listed. Both Rhino (who purchased Kaleidoscope Records), Edsel Records in England, and Collectors Choice issued the Kaleidoscope albums pretty much unaltered.

This discography is based on the discography by Jeff Alexson and Tom Diamant published in the February 1988 Western Swing Newsletter.There are still unanswered questions and it is continually being researched and updated.