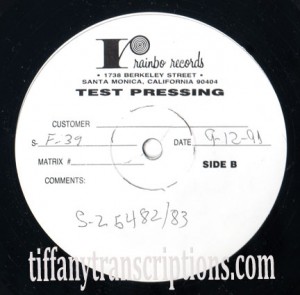 Volume 10 was planned, but never came out due to Kaleidoscope Records being sold. Its new owners never released it. Kaleidoscope got as far as having test pressings and art work made. It was planned to come out on LP, CD and Cassette. The LP was going to be a picture disc with a hand tinted (pre-photoshop days) picture of Bob Wills on one side and a tinted picture of Tommy Duncan on the other. The CD and cassette were going to have pictures on them as well. This was to be the last of the LPs and the last of what Kaleidoscope Records felt were the cream of the crop recordings.

Some people call The McKinney Sisters CD, “Volume 10” but this is not correct. That was part of a new series and was numbered 6002. 6001 was to be an album of Bob Wills fiddle tunes from the Tiffany Transcriptions.

The fiddle album never got past the planning stages.

The Tiffany Transcriptions Volume 10 “Fiddlin’ Man” has never been issued. Here’s a list of what was going to be on it and some samples.