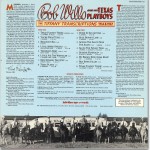 Bob Wills may have lived in California during the time of these recordings, and he may have established his position in the music world while in Tulsa Oklahoma, but they were the Texas Playboys and they always had Texas in their souls. You’re From Texas a concept album featuring the intro theme which was played at the beginning of each Tiffany Transcription show and the outro theme with songs and tunes about Texas sandwiched between.

One of the songs Little Joe The Wrangler was from a poem written by Howard “Jack” Thorp and published in his book Songs Of The Cowboys. The melody was taken from Little Log Cabin in the Lane (a minstrel song written by Will S. Hays in 1871). It was immensely popular and was recorded by at least nine different artists in the 1920’s and 30’s. Thorpe was born into East Coast wealth and went to privileged schools, but went West and became a cowboy, working and collecting songs and poetry for 50 years. He preserved many traditional songs learned on the range, but this one he wrote. It is one of the few “story” songs the Playboys recorded and Tommy Duncan does a great job with the vocal. Junior thinks the song is ending after the second to the last verse and plays his outro tag, but Tommy keeps singing one more verse, then Junior and the rest of the ensemble play the outro.

Who’s the kid on the album cover photo? What a photo, thanks Bob Stinnett.

<<Vol. 3…………………………….Vol. 5—>>>
©2012 tiffanytranscriptions.com All Rights Reserved. The purpose of this site is to give information about the Bob Wills Tiffany Transcriptions. It is not owned by or associated with the current owners of the Tiffany Music Company.