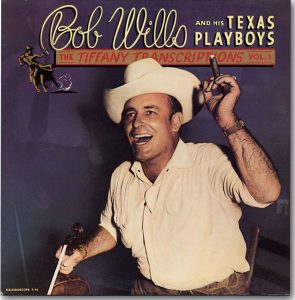 You can click on the title to listen to the song. These are from youtube and not maintained by this website. If a link does not work, please inform us tiffanytranscriptions@gmail.com

I Hear You Talkin’

The Girl I Left Behind Me

Straighten Up and Fly Right

What’s the Matter With the Mill,

Jumpin’ at the Woodside.

This was the first release and was to give an overview of what was to come. From the traditional sounding twin fiddle western swing , to the hot jazz vocals, blazing hot instrumentals, to old time Texas fiddle tunes. Each track was chosen so that all the musicians on the series would have a moment to shine.

The album started out with Nancy Jane an unissued cut from the transcriptions. This was chosen because in 1932 Bob Wills and Milton Brown, along with Derwood Brown and Sleepy Johnson, recorded the first two songs ever issued that Bob Wills played on, Sun Bonnet Sue and Nancy Jane (issued under the name of the Fort Worth Doughboys). Bob had recorded earlier, in 1929, two fiddle tunes that were never issued and the masters have been lost. Kaleidoscope purposely put this cut as the first tune to pay tribute to Bob’s first recordings and to start with a tune never heard before since it had been recorded.

Also, included in the album was Black Out Blues. This four and a half minute blues was the last song recorded at the December 30, 1947 session and the last Tiffany Transcriptions song ever recorded. It was also the last studio recording of Tommy Duncan with Bob Wills (until their reunion recordings for Liberty Records in 1960). The next night, New Year’s Eve, they played at the Havana Ballroom in Oakland. On January 1, 1948, James Petrillo, head of the musicians union, imposed his second ban on recording that lasted through most of 1948. By the time the ban was lifted Bob Wills had fired Tommy Duncan.

But the track that took everyone by surprise was Mission To Moscow  . Composed by Mel Powell and originally performed by the Benny Goodman Orchestra as a big band number, the Playboys took Mission to Moscow to a totally different level. It has since become something of a standard for modern western swing bands. A few big bands still do the Mel Powell/Benny Goodman arrangement, but most modern recordings are based on the Bob Wills Tiffany Transcription version. Click here to hear the Benny Goodman original version. Click here to hear the Bob Wills Tiffany Version.

A few other facts: The back photo was from the actual Tiffany Transcriptions recording session of September 6th, 1947.

On the original Kaleidoscope CD the track indexing is incorrect. Lone Star Rag follows Dinah without a separate track index. Therefore track four on the CD player index is actually the fifth song Cotton Patch Blues, and all subsequent songs are one track off.