Frankie Jean is an old Memphis Minnie talking blues recorded by her, with Kansas Joe McCoy, on July 8, 1930, in Chicago, Illinois as Frankie Jean (That Trottin’ Fool) (Vocalion 1588). Here’s a short clip of the song:

It is likely that Duncan learned it from that recording since his versions are so similar. Duncan had recorded the song before, on the January 26, 1945 Wills session for Columbia, in Hollywood, California, as an improvised jam that starts in the middle of the song. For some reason the recording engineer turned the cutting lathe on sometime after the song started. It was not an “official” take, and was never issued, or known about (it was not in any previous discography), until the Bear Family Records release,  San Antonio Rose in 2000, which had the complete Wills Columbia sessions. Here’s a short clip:

The Tiffany version, recorded on 4/8/1946, was not issued on the Transcription set and it remained unissued until the Kaleidoscpe reissue series Volume 3 was released. It’s just Tommy Duncan talking the song with a guitar player (possibly Junior Barnard) backing him up. Here’s a short clip: 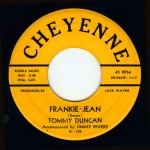 Duncan must have really like the song because he recorded it again in 1959 (with the legendary Jimmie Rivers on guitar). According to Steve Hathaway’s unpublished Tommy Duncan Discography, it was originally released on the Cheyenne label out of Niles, California (just South of Oakland), produced by radio D.J. Black Jack Wayne. The song Hello Mister Worry was on the flip side. Here’s a short clip:

(Thanks to Steve for the Cheyenne label scans) 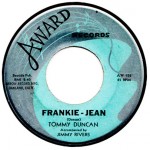 The Cheyenne release received a favorable review in Billboard Magazine’s July 20, 1959 issue
Tommy Duncan
Frankie –Jean (Rorile, BMI)-Duncan exudes plenty of savvy and showmanship in this reading of this folkish tale of a horse named Frankie-Jean. It’s an interesting bit of material, and the lad registers strongly in his attractive presentation. Flip is “Hello, Mr. Worry.” (Glendell, BMI). Cheyenne 108

It was later reissued on the Award label out of Oakland, California with Let Your Troubles Go Down With The Sun on the flip side