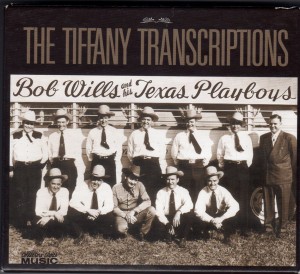 In 2008 Collector’s Choice Music released a box set of the Tiffany Transcriptions. Collector’s Choice is both a mail order record company and a re-issue label. They send out a paper catalog several times a year filled with older music, on various labels,  crossing a broad spectrum of genres. They also reissue older recordings on their own label. Under the direction of Gordon Anderson (who is no longer with the company) they licensed from Rhino Records all the Bob Wills Tiffany reissue albums that Kaleidoscope Record had originally produced, (Vol. 1 through 9 and the McKinney Sisters) and released them as a box set. Rhino had been slowly letting their reissue CDs of the original Kaleidoscope Records albums go out of print so this was a welcome release for those who did not already own them.

They were released in a small cardboard box with each CD in a mini gatefold jacket using the original Kaleidoscope album covers that graphic artist Elizabeth Weil had designed. Inside and on the back of the gatefold, the original album notes from the musicians were reproduced, but not the notes by Kaleidoscope and not quite all of the original images and graphics. Otherwise, the selection of songs and sequencing were exactly the same as the original Kaleidoscope Records releases. No new tracks were added.  Also enclosed in the box was a 16 page booklet containing notes by Rich Kienzle as well as comments by Ranger Doug (Riders in the Sky, Time Jumpers), Ashley Kingman (Big Sandy & his Fly Rite Boys), Big Sandy, and Ray Benson (Asleep at the Wheel). The 10 disc set sold for around $110.00 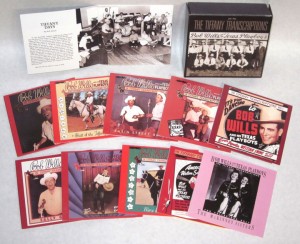 This was Collector’s Choice Music’s first box and they made a big deal about it. Unfortunately the actual box was not well constructed and quickly suffered damage. Since this was exactly the same music as the original, and then reissued by Rhino, Kaleidoscope reissues, what was the difference? Collectors Classics made much about how improved the sound. There was no digital noise reduction when Kaleidoscope released their albums, so on the Collectors Choice version the “clicks” and “pops” have been generally removed which makes for a cleaner sound. There is a small amount of eq difference between the two sets but not enough to really notice unless you made an A-B comparison. The sound is good, but one thing about the Tiffanys was that they were originally recorded really well, and for the most part the original acetate masters were in good condition.

The notes by Rich Kienzle give a good description of the scene in California at the time when Bob Wills moved there and has some good background information on Cactus Jack. He discusses the musicians and has some good quotes from them about playing in the band and he goes nicely into the repertoire they played. He doesn’t go too much into the business end of the Tiffany Transcriptions and he did not seek source material, such as what is found on this website. He makes a couple of minor errors1, but on the whole they are a good complement to the musician’s notes found on the original Kaleidoscope releases. The comments from the contemporary musicians noted above show how much these recordings influenced them and their bands. There are a couple of nice added pictures in the booklet, including one of Wills Point, the ballroom and swimming pool that Wills owned in Sacramento, California.

The credits in the booklet give Gordon Anderson the title of “Executive Producer” and Claire Morales credited for “design”. They did not give any credit to the original Kaleidoscope Records production team even though it was a reproduction of Kaleidoscope’s  original reissues. Jeff Alexson and Tom Diamant  who produced the reissue albums for kaleidoscope, chose the songs and sequenced the records, were not credited. Elizabeth Weil who designed the original album covers, every one of them used by Collectors Classic Music in their box set, was not credited. When contacted about this Gordon Anderson said that it was not Collectors Choice Music’s policy to give credit to the original producers on their reissues, but he did say he would give credit if there was a reprint. Too his credit there was a reprint and in small print they do give the proper credit to Alexson, Diamant and Weil.

Although the set was well received by reviewers, fans were disappointed. Why were their no new songs? Why issue a set of music that was mostly still available. Why waste 10 CDs when they could have fit on 5?

The set is now out of print and can be found offered on Ebay and Amazon for large sums.