The only documentation we have found is a purchase contract, dated June 26, 1948, where the Tiffany Music Inc, purchased all the assets of The Tiffany Music Co. In this agreement one specific asset is particularly mentioned, that of the recording license between Cliff Sundin and the American Federation of musicians (AFM) dated June 1, 1945. This license would allow Cliff to start recording in 1945.

There were transcriptions of Bob Wills and his Texas Playboys recorded at radio station KERN in Bakersfield California in 1945 and early 1946 and broadcast on KERN and KMJ in Fresno. These followed the same format as the Tiffany Transcriptions using the same theme, but these recordings never appeared on the Tiffany Music  transcription discs. Cliff Sundin could have been involved in these sessions, since he had an AFM license to record in 1945, but there is no documentation yet found to substantiate this. 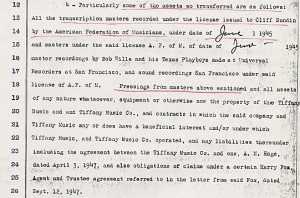